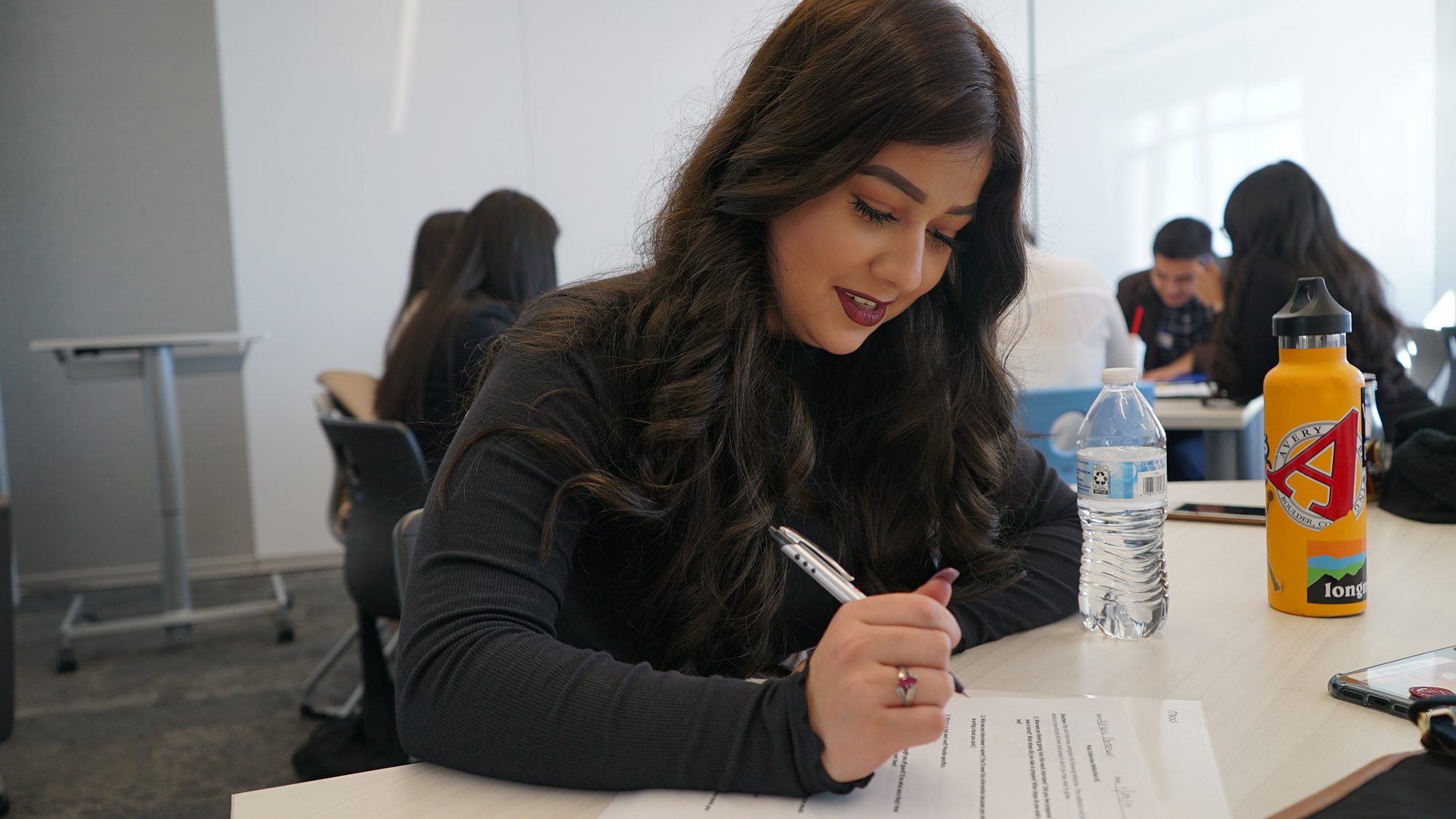 Job interviews can be intimidating, especially when you’re a teenager. But Adriana Guzman is prepared for the first question: Tell me a little bit about yourself?

“I’m a junior at Skyline High school,” she replied. “I’m also enrolled (at) Front Range Community College where I have 30 credits, college credits.”

The 17-year-old is trying to land a client management intern job at IBM in Boulder County. Guzman is meeting with an IBM employee, but the interview is a mock one, taking place at the Innovation Center in Longmont.

“What we need to do is integrate the community college experience with the high school experience so you’re getting both at the same time,” said Brandon Shaffer, executive director of legal and governmental affairs, community outreach and P-TECH for the St. Vrain Valley School District.

In 2015 Skyline selected 50 eighth-grade students, who applied to the program, to be part of Falcon Tech’s first cohort. The group, which included Guzman, took their first college class second semester of freshman year. There are now three cohorts of students in the ninth, 10th and 11th grades.

Another part of the P-TECH model is a mentorship program. Each Falcon Tech student is paired with an IBM employee who serves as a mentor. The whole group meets for regular events like this mock interview session for juniors and their mentors. The activity is to prepare the students for upcoming interviews for summer internships at IBM.

Mirriah Cantrell works in outsourcing at IBM and has been Guzman’s mentor for three years.

“It’s been a great amount of growth that I’ve been able to see her go through,” Cantrell said. “The chance to help these kids to excel is what drove me to do it. It was just to be a part of something bigger than myself.”

Setting Students On A Different Path

Former Gov. John Hickenlooper signed the P-TECH bill in 2016. It allows students, starting in the ninth grade, to qualify for in-state college tuition. St. Vrain Valley not only pays for their students’ college classes while in high school, but up to two years after graduation.

“I think this is the direction that education is ultimately going to go,” said Shaffer.

The first two years of the program, the students take general and core classes together. Then junior year, they start to specialize in one of three pathways: tech support, web development or programming. Front Range Community College provides the course work for the students.

The three pathways were selected based on the needs of the IBM offices in Colorado and to prepare the students for middle skills jobs, said Marty Goldberg, director of high school programs for Front Range Community College, Boulder County campus. These jobs require technical and workplace skills and pay a middle-class wage.

“This is an opportunity for those underserved populations, under-represented populations in our colleges and universities to get a leg up in life,” Goldberg said. “Set them on a different path towards something that’s meaningful, fulling and has a secure future.”

More than 56 percent of Coloradans have a certificate or college degree, making the state one of the most educated in the country. But this is short of what’s needed for Colorado’s changing workforce where, as early as next year, almost three-fourths will require a postsecondary degree. One issue is the gap between graduation rates for students of color compared to their white counterparts.

Hispanics are the largest and fastest growing ethnic group in Colorado. Most of that growth comes from within (birth rate), rather than in-migration (people moving to the state). The Hispanic population is younger than Colorado’s total population and makes up about 33 percent of residents under the age of 18, according to Elizabeth Garner, the state demographer.

But less than 30 percent of Hispanics finished a higher education program last year while the completion rate for white students was over 60 percent. The attainment gap between the two groups is the second highest in the nation.

The population at Skyline High School is 59 percent Hispanic and 64 percent minority students.

“A lot of them aren’t just the first to be in college, maybe the first to graduate high school and so it’s a different pathway,” said Louise March, the school counselor for the Skyline’s P-TECH program. “And sometimes it’s difficult to succeed when the rest of the family isn’t. So, they’ve very brave and they’re breaking barriers.”

The first P-TECH program was launched at a high school in Brooklyn in 2011. It was created to address the gap in skills needed for science, technology, engineering and math (STEM) and high-growth industry jobs, providing underserved youth with a direct pathway to a college degree and career readiness. Since then, P-TECH has been implemented in schools across the country.

“In order to really create a talent pipeline,” said Eric Berngen, the IBM program manager for Falcon Tech, “we had to go down to the high school and community college and start our partnerships there and working towards building our own talent.

After finishing P-TECH, Skyline students could be hired at IBM or other technology companies. But they don’t have to go directly into the workforce. Some will continue their education and attend a four-year college like Guzman, who will be the first in her family to get a postsecondary degree.

P-TECH is gaining in popularity. Since Falcon Tech was approved in 2015, six more programs have opened at high schools around the state. They partner with different community colleges and businesses.