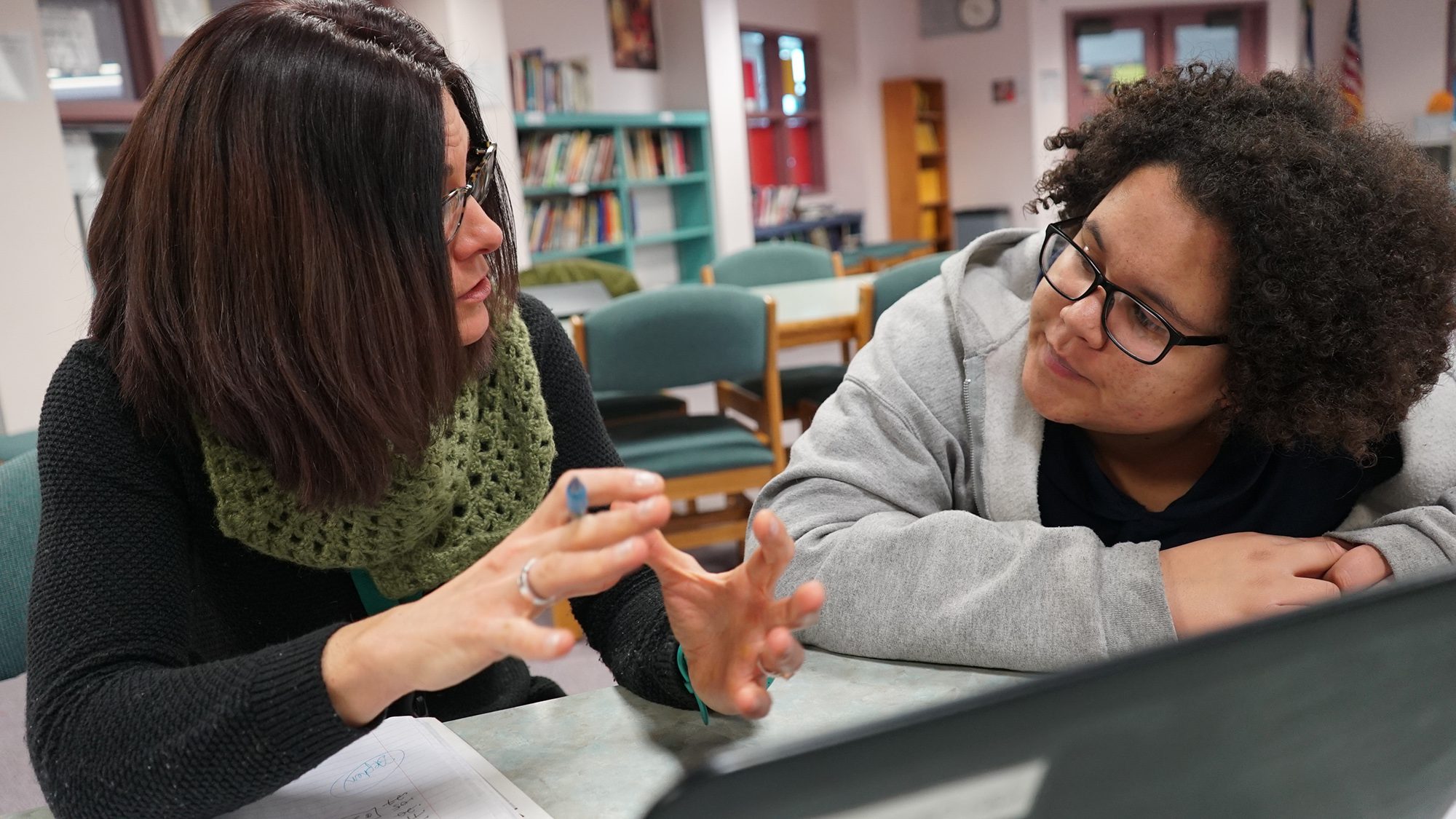 High school freshman Ecko Gardner-Huff sits in the school library at Sobesky Academy. She’s taking a survey of different career options, checking off the jobs that sound the most interesting.

Gardner-Huff is working with her school counselor Dina Klancir. Klancir is the only full-time counselor at Sobesky Academy in Wheatridge. The small K-12 school is part of the Jefferson County School District and serves students with social and emotional disabilities including autism and severe anxiety.

When it comes to a life and a career after high school, Klancir said all options are on the table for the students.

“Part of my role is if that’s something that they do see as a possibility, is creating that potential for them and maybe opening a door where they didn’t see a door before,” she said.

School counselors are the utility players at a school, said Carlos Hipolito-Delgado, an associate professor of counselor education at the University of Colorado Denver. They work with students on their academic and career planning and social and emotional development.

“So that (students have) got better social skills,” said Hipolito-Delgado. “That they are able to excel academically and that they’re able to have multiple options and multiple pathways going into post-high school life.”

There are not enough counselors in Colorado’s K-12 public schools.

A decade ago there was one counselor for every 500 students, double the number the American School Counselor Association recommends. The state’s low per-pupil funding, which is almost $3,000 less than the national average, is part of the issue. Districts just don’t have enough money to hire counselors.

“Colorado has local control with the way their dollars are spent,” said Andy Tucker, director of post-secondary and workforce readiness for the Department of Education. “So, it’s a matter of prioritization around where school districts feel that they need to prioritize their dollars.”

This lack of counselors led to the creation of the School Counselor Corps Grant Program (SCCGP). The grant was approved by the state Legislature in 2008 and funded a year later. Schools receive the grant based on criteria including free and reduced lunch, graduation and dropout rates.

“Sustainability is an expectation in the grant program,” said Tucker.

Klancir has been a school counselor for a decade. Two years ago, she was hired through the SCCGP to work at Sobesky Academy. She is one of 10 grant counselors working in Jeffco middle and high schools.

In 2011, Jeffco’s ratio was one counselor for every 291 middle and high schools students. Since then, the district has worked to drop its secondary school ratio. While it varies by school, the range is now one counselor to 275-325 students for the sixth through 12th grades.

Elementary schools are now eligible for the grant, so the district plans to place a couple counselors there with their latest round of funding.

The grant works on a four-year cycle. The first is a planning year to establish the needs of the school, then a counselor is hired there for the remaining three years. This creates a staggered system, with a new cohort of counselors starting every year. The cohorts meet as a group every other week to discuss different topics and share resources.

“I think that’s one of the greatest assets of the grant and having multiple cohorts,” said Sonya Sallack, SCCGP manager for Jeffco schools. “We have a group that really gets to work together and collaborate and problem-solve together.”

Klancir said the cohort model is helpful. Of the current grant counselors, half are in their first year and the other in their second.

The counselors work in different schools and sometimes combine field trips and share buses. They work with a lot of students who have overcome significant hurdles in their lives, Klancir explained, which can lead to the counselors experiencing vicarious trauma.

“You get views of what’s happening at different schools and so you get great ideas because everybody is working with a different population of students,” Klancir said. “It’s a great support network.”

The Colorado Department of Higher Education has a master plan for 66 percent of adults to have a certificate, two-year and four-year degree by 2025. One of the four strategic goals under the plan is to increase credential completion.

In 2016, institutions of public higher education produced about 48,850 credentials. The department’s goal is to increase that by an additional 73,500 certificates and degrees in six years.

Over the past year, Colorado has seen strong growth in construction, mining and professional business services jobs, said Ryan Gedney, senior economist at the Colorado Department of Labor and Employment.

Some of the top industries in Colorado are retail and construction, which can require a high school diploma or certificate, and professional, scientific and technical services (like lawyers and engineers) which require a bachelor’s degree or higher.

“(Colorado has) I think a really rich and diverse industry mix,” said Gedney. “A really unique mixture and kind of degrees required for the industries and occupations.”

While having a postsecondary certificate or degree can qualify a person for a well-paying job, Gedney said earning potential increases with educational attainment. People with a bachelor’s degree or advanced degree can earn 63 percent more than those with a high school diploma.

Options For The Future

Garret Duchesneau is a senior at Sobesky Academy. While finishing high school, he is also enrolled at Warren Tech. Duchesneau originally planned to attend a four-year college but decided technical school was a better fit. He is studying plumbing while working about 20 hours a week as an apprentice. Duchesneau plans to get his license and work his way up to a master plumber.

Klancir invited Duchesneau to talk to the other high school students about his job and trade careers in general.

“(It’s a) really neat opportunity for them to get to hear Garrett’s story,” Klancir said. “College is a possibility but so are all these other careers that are in dire need if you want to stay in Colorado.”

Gardner-Huff is finished taking the job survey. She checked ‘yes’ for several jobs that fall under social, artistic and enterprising occupations. Gardner-Huff is also interested in culinary arts but for now, she’s keeping her options open.

“The one thing I really want,” she said, “is to have different degrees (in) what I’m good at.”

Editor’s Note: This story has been updated with corrected figures from Jeffco Schools regarding the ratio of counselors to students.