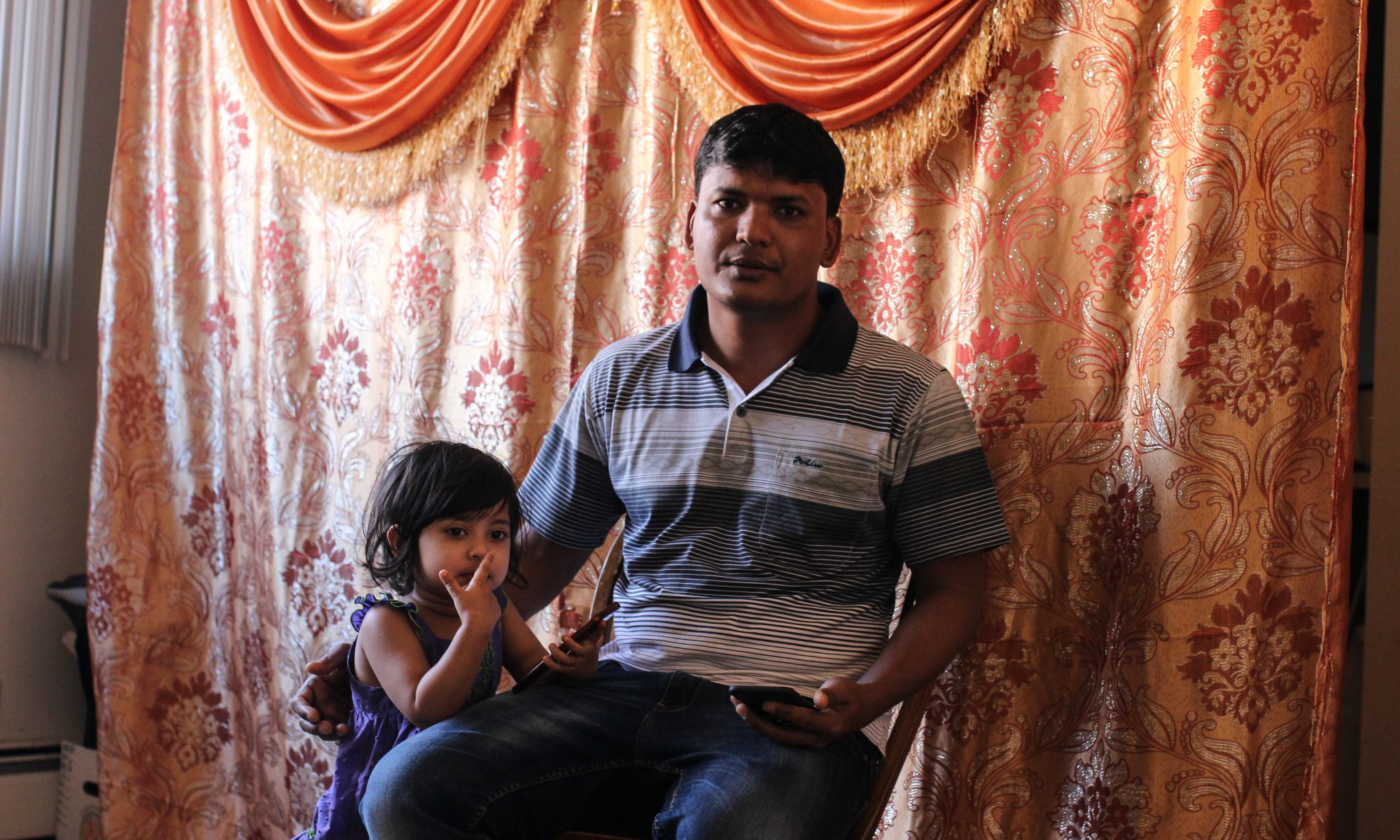 At his one-room apartment, 35-year-old Abul Basar made a tight fist with his right hand. As he opened his palm, his ring finger remained bent and rigid. “It’s locked my finger, (it) doesn’t work,” he said.

Basar came to the area as a refugee in 2017 after escaping violent persecution in his former country of Burma, also known as Myanmar. He said he fled to Bangladesh and then Thailand  and eventually Indonesia, where he was detained for nearly a year by immigration authorities. Today, he’s relieved to be in the U.S.

“This was very difficult times,” he said. “There was no work over there, just eating (and) sleeping, that’s it.”

He shares a home with his wife and two young children — who he hopes will aspire to be lawyers or doctors. He’s happy here. But he said didn’t realize the work would be so difficult.

Like many of the refugees living in Greeley, Basar is employed by JBS, a massive meatpacking plant that processes thousands of cattle per day and employees over 3,000 people. Basar said it was his caseworker who helped him apply for a position on the processing line where he used a large electric knife to disembowel cow carcasses. After only a few months at the plant, his hands began to hurt.

Less than two years later and Basar is already dealing with an injury to one hand, which doctors said was caused by making the same repetitive motion day after day. Soon he’ll meet with a specialist who will determine if it requires surgery. In the meantime, his work has re-assigned him to a lighter task, folding cardboard boxes.

An industry reliant on refugees

A job at a meatpacking plant is one of few options available to a low-skilled worker who speaks little to no English. It also offers benefits and pays a starting wage of $13 to $15 an hour. That’s the main reason, according to a report by the Fiscal Policy Institute, that the meatpacking industry has the fifth highest concentration of refugee workers, behind taxi drivers and truck drivers.

In 2006, immigration raids at six meatpacking plants, including the JBS facility (formerly Swift & Co.) led to the deportation of about 1,300 undocumented workers. In the following years, refugees would fill those positions and Greeley would become one of three primary refugee resettlement sites in Colorado. Now that the Trump administration has dramatically decreased the admittance of refugees, it remains unclear how the drop in numbers will impact the local industry.

JBS wouldn’t comment for this story, so instead KUNC spoke with Eric Mittenthal with the North American Meat Institute, a trade association which represents the industry. He said that while refugees commonly work in the industry and are viewed as good employees, he insisted companies like JBS aren’t concerned about the Trump administration’s policy. They only care about finding enough workers, regardless of where they come from.

But finding those people isn’t easy in an industry with a high rate of worker turnover and injury — 2.5 times the national average. Those challenges are compounded by the current low rate of unemployment, which has led to a shortage in available workers.

In Greeley, Abul Basar sat with four other JBS workers as they discussed the particulars of their job. Each one came to the U.S. as a refugee, either from Burma or Malaysia, and their conversation quickly turned to the physical demands of working the plant’s fast-paced processing line.

One man, Mohammed Nur, said the risk for injury depends on the task you’re assigned to.

“If it is heavy things (you’re) lifting up, then people (get) back pain. A knife-using job then people got finger problem(s),” he said.

Another man, Mohammed Shaker, had not yet started his job at JBS. But after hearing from the other men, including one who’s been there for nine years, he said it’s not an ideal career. Through an interpreter, he explained he knows he has few choices.

“He has to go to JBS because it is the (easiest) one to get a job for a non-English speaker,” the interpreter said.

While the men were critical of their jobs, they all agreed that JBS is still their best option. That could be partly why research suggests refugees are more likely to stay at these jobs longer compared to U.S.-born employees.

“I have a country right now”

Most days Abul Basar is just thankful to be in the U.S. He said he loves Greeley and the chance to experience all four seasons.

“I have a country right now,” he said. “I don’t have any problem here. Just working. My feeling right now is very … good.”

He just had no idea that the work would be so difficult.

At a doctor’s office near downtown, Basar entered the narrow elevator with his medical interpreter. He was there for his appointment with a specialist, anxiously awaiting a decision of whether or not he needed surgery for his injured hand.

After 20 minutes inside the visiting room, he returned with good news.

Physical therapy and the break from his job on the processing line helped the injury heal. At least for the moment, surgery was not necessary. Basar was visibly relieved as he said goodbyes to his interpreter. He drove home to have lunch with his wife and prepare for his 3 p.m. work shift at JBS.